Showing posts from January, 2017
Show All

- January 30, 2017
It is symptomatic, it is historical, it is cumulative and has been undiagnosed since 1962. The fuel is:  internal unrest between 1966-1971, the debauched war to topple Amin, the international embargo against Uganda during Amin's regime, the devaluation of the Uganda shilling with promise to compensate people that was not fulfilled, the 1979 war, the 1983 Bush war, the promises to compensate those who lost property in the wars which were fulfilled for some and not others and the impact of HIV. My late grandfather served as one of the first chiropractor-medical assistant in various places in Uganda including Mbarara and Masaka. He retired in the 60's. His children were educated in various schools. My father won an Engineering scholarship which took him first to Britain, Italy, Germany and then Brazil. In Britain, he excelled at the Guy-Leyland Industry, in Italy he beat the computer at assembling a Fiat engine. He helped improve circulation and reuse of oil in diesel
Post a Comment
Read more 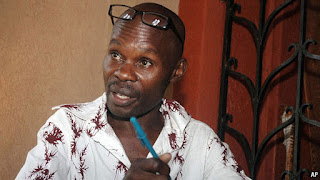 "..... we should try as much as possible to promote awareness around HIV and then show the ease with which it is transmitted among LGBTIQQ. I thank you for bringing the public health angle to the activism we are doing. I am part of an organization called Integrity. It is a spiritual support group and our Pastor is Bishop Ssenyonjo Christopher. You should come to one of our fellowships one of these Sundays ....."  This was in 2004, and these were the words David Kato shared, animatedly, with me over a cup of coffee downtown Kampala. After watching what David Kato was doing since 2002, I noted we shared a philosophy. We shared the concern over the link between HIV transmission and the myth doing the rounds that no one caught any disease through anal sex!  David Kato told me that he was a great friend of  the Justice of the Constitutional Court, Edwin Cameron who in 1997 announced that he had been living with HIV. David's work with Judge Cameron (SAHO, 1999) invo
Post a Comment
Read more

What we mean when we say END TO HIV; communicating appropriately

On The verge of Homelessness In a country That is Preparing for Elections, Refugees Are Wondering When the Next Cheque Will Come To Enable Them Pay Rent 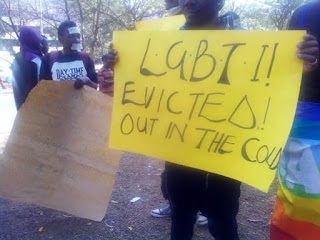 About to be evicted for 4 months back rent, refugees sought support from UNHCR (Photo courtesy of Alia Adams) The landlord, had always been distant, kind, patient and tolerant. It is the wife who sometimes would prepare a Kenyan dish which she shared with the people who rented one of their small 2 bedroom house. She was the face they saw most of the times and she reminded them of all mothers.  The landlord lives nearby in a bigger 5 bedroom house so it is not uncommon for someone from the landlord’s home to come and ask them for a helping hand or run errands.  Matasia, Ngong is an exclusive part of Nairobi Capital City. A part of a larger escarpment so many feet above sea level. The climate and rich soils allow the lush green leaved trees to grow to very large sizes. The neighbourhood is considered urban and the roads are paved. It is the serene setting out of glossy magazines. To have this place, they pooled together money they
11 comments
Read more

- January 25, 2017
A friend asked me to point out crucial relations between the language we use as we provide effective healthcare services in particular for People living with HIV. I suggested it was no less a language thing as much as it is mobilizing beneficiaries and providers around ensuring delivery of services that promote healthy outcomes. These can be the beginnings of a policy change itself. Social marketing, media advocacy and community organizing can be used to promote meaningful involvement of people living with HIV (PLHIV). It can be made an effective empowerment mechanism in giving feedback on how PLHIV are impacted by services they require e.g., health care, medication, housing, communication and modernization of policy. In using the three approaches, there are inbuilt advantages including cultural competency (Bentacourt J.R. 2005), tackling stigma and improving the quality of life for those living with HIV. Through social marketing it is possible to influence practices at different l
Post a Comment
Read more

- January 25, 2017
Empowering Young MSM born with HIV (YMSMPoz) to communicate SRH preferences appropriately can reveal other vulnerabilities MARPS in Uganda created the #YMSMPoz as an internet ribbon cutting ceremony to celebrate working with 278 HIV positive sexually active Young MSM below 35 years. 97 of them are 25-29 years; 81 are between 22-25 years; and 100 are between 17-22 years. All 278 are taking medications. 175 do not identify as LGBTIQQ. 180 use some form of substances. All of them have missed their medications at one time in the previous six months.  189 engage in a form of talent and performing art but, have had no chance of exploring their talents under a more talented mentor or instructor. YMSMPoz has been a culmination of events. In 1997, we worked as an orphan support organization in Uganda and by 1997 had 25 young children living with HIV we were caring for. We could not look after the children so we handed them over to another organization as we were changing our object
1 comment
Read more

- January 20, 2017
In 1997, we were the Good Samaritan Uganda. But on January 20th 2004, six days before the NRM day, we came up with an organization to help look after disowned LGBTIQQ. Little did we know we would become MARPS in Uganda. 2004-2005 1. We are invited to join Icebreakers and SMUG. 2. We get a small three-bedroom house, we use it as a resource center and clinic eventually. 3. We had our first eviction from the house we used as our resource center toward the end of 2005 for allowing LGBTIQQ to "offend" the neighbourhood. 4. We moved to another location and by December 1st World AIDS Day, we had 23 LGBT-living with HIV. 5. We develop an Interfaith Mechanism bringing together Muslim, Ismailia, Baha'i, Orthodox, Adventist, Roman Catholic, Brazilian Catholic, Anglican, Pentecostal, Sikh and other religious LGBTIQQ Persons to share spiritual experiences. We have our first HIV Candlelight Vigil! 2006-2008 1. We continued with our work around s
Post a Comment
Read more
More posts