Language is powerful. I hope the marginalized communities invest in mechanisms to craft a language that humanizes them and one that seeks to show action rather than incendiary rebuttals.

Even as LGBTIQQ Dignity of Persons Champions learn to articulate issues, even as they learn what it takes to be included in policy, programming and planning, they should be abreast of what the opposition is crafting too. CIVICUS provides such materials and we are grateful to them.

This is part of the CIVICUS report excerpt of interest I wanted to share with you here:
“……..anti-rights groups are genuinely non-state groups and sometimes they are set up as the proxies of state interests, but often they sit somewhere in between, tightly enmeshed with political parties and repressive states. Anti-rights groups are most effective when political leaders, parties and states pick up on and echo their narratives, and when anti-rights groups are able to connect with and amplify regressive discourse that comes from the top. These often close connections between anti-rights groups and political power are one of the multiple forms of linkages that are enabling anti-rights groups to achieve influence. Anti-rights groups are networking with each other, linking across issues and forging common narratives and campaigns; faith-based groups and secular groups are putting aside differences to work with each other; and anti-rights groups are increasingly sharing strategies and resources internationally and working in international arenas, where they seek to reverse global human rights norms and prevent progressive international agreements. Anti-rights groups pursue a range of common tactics that together make up the anti-rights playbook. These include the use of apparently legitimate channels, enabled by positioning themselves as part of civil society, including court actions, campaigning in elections, triggering referendums and participating in consultations; mobilising people in public space, including with the intent of disrupting or preventing civil society mobilisations; using and manipulating social media, including to promote narratives and recruit support, and to spread disinformation and conspiracy theories, promote hate speech and smear and harass civil society; and enabling and directly deploying physical violence. As foundations for these attacks they are borrowing and distorting the language of human rights; organising in opposition to what they characterize as ‘gender ideology’; and mobilising highly conservative interpretations of faith identities and appeals to distorted notions of tradition and culture.”

There is need to have a language that leverages rights promotion, upholding respect and protecting dignity of persons. 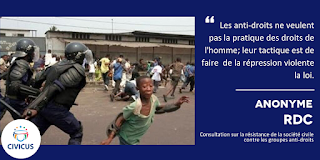 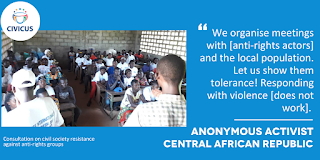 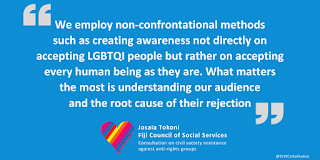 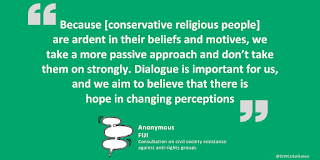 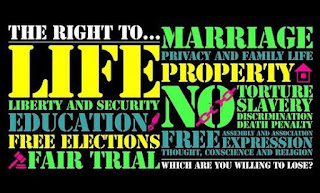