Q And A Forum: Know About PEPFAR

PEPFAR is currently guided by two main strategies: the overarching strategy laid out in PEPFAR 3.0 – Controlling the Epidemic: Delivering on the Promise of an AIDS-free Generation and a complementary, more targeted strategy for accelerating implementation of PEPFAR efforts in certain high-burden countries laid out in The PEPFAR Strategy for Accelerating HIV/AIDS Epidemic Control (2017-2020). PEPFAR 3.0 focuses on achieving sustainable control of the global HIV epidemic through a focus on transparency, accountability, and impact. It also sets five core priorities for the program:
PEPFAR’s 2017-2020 strategy outlines its plan to accelerate implementation in a subset of 13 PEPFAR countries that, according to PEPFAR data, show the greatest potential to achieve HIV/AIDS control by 2020: Botswana, Côte d’Ivoire, Haiti, Kenya, Lesotho, Malawi, Namibia, Rwanda, Swaziland, Tanzania, Uganda, Zambia, and Zimbabwe. The strategy emphasizes accelerating testing and treatment strategies, expanding prevention, using quality data, engaging with faith-based organizations and the private sector, and strengthening policy and financial contributions by partner countries. It is also intended to align with the UNAIDS 90-90-90 targets.

PEPFAR activities focus on expanding access to HIV prevention, treatment, and care interventions. These include provision of antiretroviral treatment, pre-exposure prophylaxis, voluntary male circumcision, and condoms. In addition, PEPFAR has launched specific initiatives in key strategic areas. For example, in 2015, PEPFAR launched DREAMS, a public-private partnership that aims to reduce HIV infections in adolescent girls and young women.
The latest results reported by PEPFAR indicate that it has, as of September 2018:
The latest results from the DREAMS initiative show declines in new HIV diagnoses among adolescent girls and young women in 85% of the highest HIV burden districts in the 15 African countries implementing DREAMS.

PEPFAR has included several spending directives, or earmarks, from Congress over the course of its history, many of which have changed over time:

Key Issues for the U.S.
The U.S. government is the largest donor to international HIV efforts in the world, including the largest donor to the Global Fund, and PEPFAR is viewed as one of the most significant and successful global health initiatives ever undertaken. Looking ahead, there are several issues and challenges facing PEPFAR, starting with questions about the extent to which the current Administration will continue to support PEPFAR’s ongoing efforts, particularly in light of its budget proposal to significantly reduce bilateral HIV funding and U.S. contributions to the Global Fund. Other issues and challenges include: 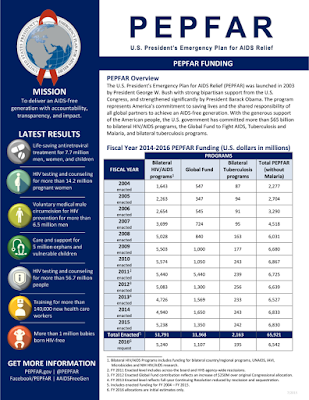