There are four Tumours of arrogance the LGBTIQQ Community should avoid.

The first tumour of arrogance: Those who have and think all this happened because of their own doing. It is called the Entitlement arrogance.

The second tumour of arrogance: Those who have and think God favoured them beyond others. It is called the God complex arrogance.

The third tumour of arrogance: Those that have but end up despising those without. It is called the Pharisaic arrogance.

The fourth tumour of arrogance: There are those who think they have but in actual fact  they have not. It is called the Dreamer arrogance.

Arrogance not only distances one from people but it is a manifestation of insecurity. It makes leaders repeat mistakes, cherish incompetence and continue pulling everything down with them even when they think they are performing.

Characteristics
Symptoms
Don't stand in the way of development, when you do you set the LGBTIQQ Community back ! 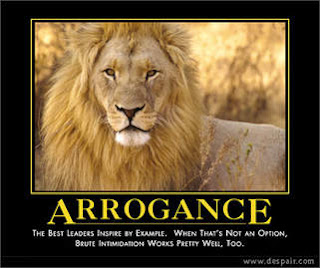