Kampala Tatler #17: A Workshop In Kampala And The Self Perpetuation Of Abuse in Ugandan LGBTIQQ Community

We just had the Anti Homosexuality Act, 2014 (sorry, the Kill The Gays Bill) annulled.

It is a half-day workshop and the theme: Documenting Abuses.
Like all workshops, they are conducted to address a gap. It means participants have to pay attention. Right?

The facilitators are lawyers who also dub in HIV Prevention activities.

But, there is this one particular lawyer who, seriously, has no clue at all when it comes to engaging participants. The name is Jar Air-head (JAH for short).

Half of us are sleeping. He is talking over our heads, is making a lot of noise and quoting archaic codes that are obsolete even in Mother Great Britain.

Over 200 participants are gathered here and the decor is so exquisite. The hall has marble floors, long gold drapers hang in all the floor-to-ceiling windows, the table cloths are red and blue and the glasses are sparkling. It is a welcoming atmosphere.

The workshop has gone on for about two hours and we are about to go for much anticipated tea-break.

DW is sleepy, the eyes are so red and the tell tale smell of alcohol. DW has moved in and out over 10 times and smoked a packet I swear! Two seats on their left in a row a little behind them I command a better vision. Sneak peek......!  The laptop is open and the screen shows FaceBook. In another opened screen is the famous dazzling screen, a Gay Dating Chat Room is open and the message talking heads are rolling down so fast with seemingly engaging chats...... Ha! DW!

Eyes rove to LCM's laptop which is open too. And as it is with LCM, there is a chatroom open as well as a Lesbian forum she seems to be moderating. Then some live streaming of a leather and drag........ohh!! I wish she got information that right now Mbarara Area has no Lesbian Support Organization and there is a need to be met but no one has bothered to facilitate that!

HD! The smile and darting eyes, shakes head to no point at all. A survival mechanism perhaps to fool facilitators that the "leaders" are attentive. After all HD is nodding ascent! But unknown to them, he actually moderating the FaceBook Hook up platform called Nigeria And Uganda Gay Support with a membership of 3,693..... Now, that is a lot of boys and men!

FDR! Just flew in two days back from USA after a week there on some errand this or other. One of the most travelled Ugandan and I bet one with enough travel miles won in return,  has been engrossed with the phone ever since we started this workshop. A joyous rictus holds across the face. The side I see.........Which world is FDR this very moment? I wonder........

There is a palpable euphoria and it is well deserved:

" ANTI GAY LAW CHALLENGED IN COURT
A number of prominent Ugandan scholars, gay rights activists, & political commentators have filed a case at the Constitutional Court seeking to challenge the constitutionality of the Anti-Homosexuality Act.The scholars include Makerere University’s Professor Oloka Onyango and the former leader of opposition, Professor Ogenga Latigo. The Budama West MP Fox Odoi and political commentator Andrew Mwenda are also among the people who filed the suit. The petitioners maintain that the Anti-Homosexuality Act violates the right to privacy, freedom of expression, assembly and association which are all guaranteed in the Constitution.They have also filed a permanent injunction at the High Court to prevent any media house from publishing names and pictures of people alleged to be gay or lesbians since it violates their rights to dignity.
More to come on this and other news stories in our newscasts: NTV AKAWUNGEEZI (7PM) and NTV TONIGHT (9PM)."
But this workshop deserves their attention, a 100% attention because it is an important one.

It hurts the movement in so many ways when the very leaders attend workshops and all they do is be the ever attentive participants in virtual chat rooms the entire session of the workshop.

In doing so, they deny their physical, intellectual and emotional presence to the movement they purport to lead. Not to mention setting a bad example. They are wont to do things that are not appropriate in a space where doing the right thing is called for. This is their big log held on their eyelashes!

There are Bible carrying preachers who use quotes and are wont to use such words like "Sodomites" or such denigrating words which deprive LGBTIQQ of dignity.

They are supposed to use their space to heal and uplift. This is their stick hanging precariously on their eyelashes blinding them of reality.

When you attend workshops, seminars and conferences but prefer your chat rooms then you too are abusing the space and the people in it. You are wrongly using your power, status and reputation.

Both the abusive preachers and chat room addicts who cannot set aside time for full attention to workshop proceedings  are abusive in the same measure. 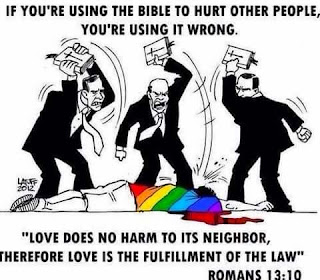