"Sexual" Like A Shoe brush or Comb, The Term Objectifies Humans As Sex Symbols; A cinder For Abuses And Fuel For A Refugee Crisis

- November 05, 2017
In a heterosexual world, there is the 'Big H' Heterosexuality and 'small h' heterosexuality. The 'big H' is the institutionalized structure with religion, ideology and politics playing important roles. The 'small h' includes matrimony, roles, literature, language and all those activities geared at operationalizing heterosexuality.

Heterosexuality appropriates and valorizes "sexuality" while at the same time delegitimizes it when it is externalized and applied to homosexuality.

In this case, "Sexual" is objectified like a shoe brush or comb. It is this same manner that objectifies humans as sex symbols and in the case of same sex/gender loving persons, it is a cinder for abuses and fuel for eviction, lynching, expulsion from school, loss of jobs and one of the causes of the LGBTIQQ refugee crisis in the case of Uganda

There are certain adjectives, nouns, adverbs, adverbial nouns and adjectival nouns that come into our daily use and we take them at the literal value.

Imagine this, Australia which is nearer China and Japan is not considered Oriental or Eastern. In fact there is a Western in the East. So among the countries of the West, Australia features highly.

The word "sexual" is like a train running off to one direction dragging with it wagons marked: security needs, safety needs, food, companionship, education or knowledge building, productivity, grief, satisfaction, talents, accountability, obligation, duty, self actualization and position in society.

"Sexual" rather than pointing to a vision of possibilities along the social, economical and spiritual planes, tends to limit or restrict many. It hides the fact that a person can be a social person, economic person, spiritual person, cultural person and a power person. Where there is hetero-"sexual" or homo-"sexual" one can also fill in hetero-economical, hetero-social, hetero-spiritual and hetero-cultural. The same can be said of homo-economical, homo-social, homo-spiritual and homo-cultural.

"Sexual" seems to be the sacrificial altar for objectification and externalizing immorals of a society. It is an excuse to denigrate and therefore delegitimize a section of people who are categorized as homo"sexuals".While at the same time valorizing hetero"sexuals."

For homosexuals and heterosexuals, the descriptor "sexual" has turned out to be a vilification for some and vindicator for others. Applied to homo-"sexuals" it depicts a group of persons obsessed with sexual intercourse. It buries deep down their responsibilities to address security needs, safety needs, food needs, companionship, education or knowledge building, productivity, grief management, satisfaction, talents, accountability, obligation, duty, self actualization and working toward building one's position in society. In other words, sustainability and contribution to one's well being and society.

Applied to hetero-"sexuals" it depicts a group of persons who are all rounders and not only obsessed with sexual intercourse. It marks them out as the ideal and good conduct persons whose morals are tied down to holiness and these people are so responsible they could be trusted. For them, security needs, safety needs, food needs, companionship, education or knowledge building, productivity, grief management, satisfaction, talents, accountability, obligation, duty, self actualization and working toward building one's position in society is spot on.

"Sexual" is like a shoe brush or comb. The term objectifies same gender/sex loving humans as sex symbols. Terms like: same gender loving or even homo-gender should come into usage and vogue. These ones draw attention to the fullness and human nature of persons. "Sexual" has been the bane of many whose orientation is not hetersoexual. Many have been forced to flee Uganda, have left loved ones and familiar domicile environments. Many have not been resettled  even while others are still fleeing.

See what others are saying about this:

Collin Stewart is a journalist whose educative blog follows the life and trials of being gay in 76 countries which criminalize homosexuality. For examples on repercussions of this kind of criminalization, read:
LGBTIQQ refugees facing hurdles

Nigerian Human Rights activist Olumide Makanjuola pulls apart the skein in which sexualizing LGB persons also fuels exploitation or damnation. He goes further to show the link between sexuality, orientation, gender identity and how these are but the fibrous nature of a larger root called personality. He makes the claim that LGB persons are complete human beings whose lives do not ONLY revolve around sexual intercourse. For further see:
every-human-should-have-sexual-freedom 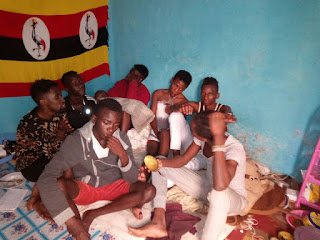