- August 03, 2017
South Africa today has the largest public-sector HIV treatment programme in the world, in stark contrast with a decade ago, when court cases and protests to force a resistant government to make HIV drugs available were the order of the day.
About 1.5-million of the country’s 5.4-million HIV-infected population now receive about antiretrovirals (ARVs) that slow down the replication of the virus in their bodies.
But over the years many myths about ARVs have arisen. The Mail & Guardian spoke to Dr Sindisiwe van Zyl of the Johannesburg-based Anova Health Institute’s HIV programme to demystify seven of these fallacies.
Myth 1: Everyone with HIV needs ARVs
Doctors use a CD4 count test – an indication of the strength of a person’s immune system – to determine whether an HIV-infected person needs ARVs. Only when a patient’s CD4 count drops below a certain level do ARVs become necessary. In the state sector, everyone who is HIV positive with a CD4 count of 350 and less is put on ARVs. In the private sector, patients are started on treatment earlier, at a CD4 count of 500.
However, if someone with HIV has tuberculosis (TB) as well, the person is put on ARVs regardless of his or her CD4 count. According to medical website WebMD, healthy HIV-negative people have CD4 counts of between 500 and 1500.
Myth 2: You can stop and start your ARVs
ARVs are a lifelong commitment. If you stop taking them, you are likely to get sicker than before. During the period that you stop taking your medication, you give HIV a chance to become resistant to the ARV drug combination you are taking and that regimen may not work for you again.
Myth 3: Once you have become resistant to your ARVs, there is nothing doctors can do for you
HIV can become resistant to your ARV regimen when you interrupt your treatment or fail to take your drugs at a set time every day. In such cases, it is possible to replace your ARV combination with a new regimen that will still work for you. It will, however, have more side effects and cost more.
When you start taking ARVs, you will generally be put on a regimen of three pills known as first-line treatment. This is the most affordable line of drugs with the fewest side effects. If you become resistant to these, you will be moved to the second line of drugs, which are more expensive and have more side effects. In the case of the second line  drugs becoming ineffective, you will be referred to a tertiary hospital where you will receive a much more complex drug combination referred to as third-line or salvage therapy.
This regimen often consists of four and not three types of ARVs and may not suppress the virus as effectively as the first- and second-line drugs.
Myth 4: ARVS give you a thin face and deform your body
Until recently, the most commonly used ARV regimen at government hospitals included an ARV known as d4T. If d4T is used for longer than a year, it can change a patient’s body shape, causing fat loss in the arms, legs or face or depositing fat in the stomach, back of the neck or breasts (in men and women). In April 2010, d4T was replaced by a drug known as Tenofovir, which has none of these side effects.
Myth 5: ARVs drive you mad
An ARV known as Efavirenz often causes people to have bizarre dreams and makes them feel dizzy and drowsy. Some people have interpreted these side effects as the onset of insanity. These reactions usually disappear within three weeks of starting to take the treatment.
Myth 6: You cannot take ARVs and TB treatment together
Everyone who is infected with HIV and has TB has to take ARVs. If you developed TB before starting your ARV medication, the TB treatment has to be started two weeks ahead of the ARVs. This gives your body the chance to first adjust to the TB drugs.
Patients with undiagnosed TB, who are started on ARVs while they have TB, often develop a condition known as TB-IRIS during which the immune system overreacts to all the medication and the TB becomes worse. It is therefore very important that doctors and nurses screen HIV patients properly for TB.
If you have been on ARVs for a while and the treatment is effective, you are unlikely to develop HIV-related illnesses including TB. But if you do, you can take the TB treatment immediately, as your body has already adjusted to the ARVs.
An ARV known as Nevirapine cannot, however, form part of your antiretroviral drug combination if you’re on TB treatment. Nevirapine interacts with a TB pill known as Rifampicin. Instead, Efavirenz will be included in the ARV regimen.
Myth 7: Babies cannot take ARVs
Babies can take special ARV syrups from as early as two weeks of age. Government guidelines require all babies infected with HIV to be put on ARVs immediately. In the state sector, infants are usually tested for HIV only at six weeks, when their mothers take them to the clinic for vaccinations. In the private healthcare industry, this happens at four weeks. However, if the child falls ill shortly after birth, the baby can get tested for HIV immediately.
Without preventive treatment during pregnancy, a mother has a 40% chance of transmitting HIV to her baby. Prevention-of-mother-to-child transmission of HIV programmes have reduced the risk to 2%. 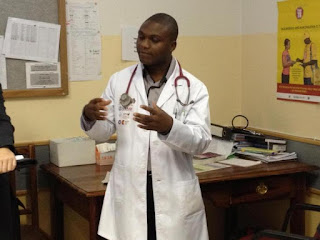