Universal Health Care as another MDG

You can't have one without the other: Why the private sector matters in reaching UHC 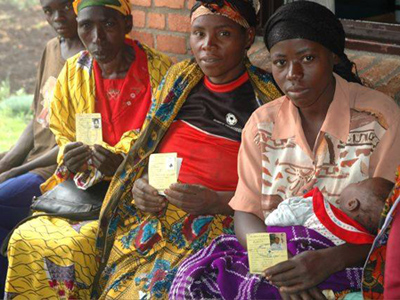 Women hold their health insurance cards in Rwanda. Governments should put in place local alliances that can continue funding for health care when donor funding subsides, according to Abt Associates' Thierry van Bastelaer. Photo by: Abt Associates
I want to live in a world where all governments, however resource-challenged, take care of their populations’ most basic needs — starting with health. In this world, fiscal resources would be unlimited (or donors will be around forever), and social solidarity is so strong that everybody is happy to pitch in to provide free care to the poorest.

A recent report from Oxfam “Universal Health Coverage: Why Health Insurance Schemes are Leaving the Poor Behind,” seems to suggest that this is the world that we live in. Unfortunately, it’s not. Arguing, as Oxfam does, that the public sector can finally bring about universal health coverage on its own ignores the complex political and economic realities in most developing countries.

Local politics have dynamics of their own — and they are not always focused on the needs of the poorest.  Charismatic, socially driven leaders retire or are replaced. The tax base or the tax collection mechanisms are generally unable to provide sufficient resources to cover government expenditures even at their current levels. And the rich are rarely happy to pay higher taxes so that the poorest can have access to free care.

In its report, Oxfam says donors should “[s]top promoting inappropriate approaches in the name of UHC, especially private and community-based voluntary health insurance schemes.” Everybody agrees that reaching universal health coverage is an enormous and daunting endeavor. But reducing the number of ways and committed actors to reach this goal is not the way to do it. Given how far most countries still have to go to reach UHC, I would venture that advocating in favor of fewer rather than more possible solutions to the millions of human crises brought about by the high cost of health care borders on the simplistic.

This is not to say that the public sector does not have a critical role to play in bringing about UHC — it’s impossible to imagine that a country could achieve UHC without a strong leadership and stewardship from its government. But to conclude from this fact that the government is or should be the only actor capable of achieving this goal is supported by neither logic nor evidence.

Political dynamics in developing countries respond to a huge array of unpredictable incentives that may or may not favor the powerful and sustained drive needed to achieve UHC. Putting all of one’s eggs in the public sector’s basket is inherently risky — and, as always, the poor end up paying for the broken eggs. Of course, difficult political trade-offs are enormously eased by generous donor support — the state’s redistribution function is challenged when it entails taking money from politically connected rich to fund programs that disproportionately benefit the poor, and donor funding can make that choice a lot less painful. But the future health of a nation’s population should not be based on the expectation of infinite support from donors.

Instead, governments should put in place local alliances that can continue funding for health care when donor funding — itself subject to a wide array of unpredictable political dynamics — subsides. In particular, government should proactively involve the only set of local actors whose main incentive is generally a lot more predictable and reliable than political dynamics: the commercial private sector.

The incentive of the private sector is simple: If there is money to be made, services will be provided.  Whether we as development people like or dislike this sometimes brutish incentive, we are doing our ultimate beneficiaries a serious disservice if we ignore this consistently reliable driver of change, and if we fail to explore how a properly regulated and supervised private sector can help the poor get access to affordable health care.

Abt Associates has identified more than 70 health insurance schemes in developing countries that involve the private sector in at least one of the three links of the insurance supply chain — financing, underwriting, and distributing. A number of these schemes — including community-based health insurance organizations — are reaching hundreds of thousands of poor families in sub-Saharan Africa and Asia, and many new ones are springing up every day. This recent shift in pro-poor health insurance will not be reversed because it reflects two growing trends: Governments recognize that collaboration with the private sector makes sense from the fiscal, practical, reputational, and political points of view; and commercial actors along the insurance supply chain realize that the low margin-high volume model of health insurance is good both for business and for low-incomes families.

The poor need more, not fewer, strategies for reducing the risks they face and accessing affordable health care, and this can only be achieved through a close collaboration between the public and private sectors.  Seeing such partnerships emerge and grow is already making the world I live in look a lot better.

Join the Devex community and access more in-depth analysis, breaking news and business advice — and a host of other services — on international development, humanitarian aid and global health.