Epicenters: Do everything at once 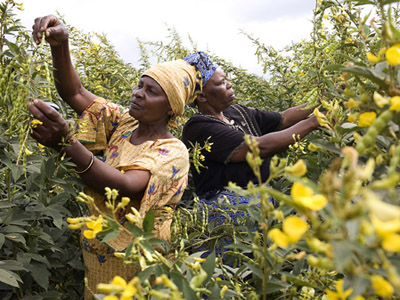 Women inspect pigeonpea in East Africa. Extremely poor women cannot escape poverty without access to a comprehensive package of services, according to The Hunger Project's John Conrood. Photo by: ICRISAT / CC BY-NC
This post is part of a series produced by the NGO alliance InterAction and Devex around the International Day for the Eradication of Poverty.

Researchers have recently documented what many practitioners have long believed — that single sector interventions have very limited impact. Extremely poor women cannot escape poverty without access to a comprehensive package of services. Women’s multiple burdens and time poverty are so severe that only when all aspects of their lives improve concurrently, particularly the reduction of their drudgery, can they make economic progress.

How can resource-poor countries in Africa provide these services — reliably and affordably — in remote rural areas? And how can the deeply entrenched gender barriers that hold women back be transformed?

The answer is people-power: to empower rural communities to establish and run their own programs, in a framework that ensures that women are in the lead. For the past 20 years, my African colleagues in The Hunger Project have pioneered a locallyled, systematic methodology — the Epicenter Strategy — that builds the capacity of rural communities to achieve all of the Millennium Development Goals. To date, more than 2,400 villages across eight countries of West, East and Southern Africa have mobilized their populations to establish 121 epicenters.

The strategy moves through four phases. Phase one is initial mobilization: It is designed to break the mindsets of resignation, dependency and gender discrimination, and create dynamic, responsive volunteer leaders known as animators among both women and men through self-reliant action projects.

Animators become specialized; there are health, agriculture and women empowerment animators from each village who are able to bring new skills, awareness and behavior change to everyone in the community. In my last meeting with agricultural animators, I asked what approach they promote for fertilizer, and they all proudly held up their bottle caps — indicating the microdose fertilizer approach advocated for in parched areas.

One challenge in Africa is village size. Traditional villages are too small to manage programs themselves and exert effective demand on district government resources such as teachers, extension workers and nurse midwives. Step by step, the strategy overcomes village rivalries and establishes a cluster of 10-15 villages that work together, through an elected epicenter committee and sector subcommittees. All committees have equal numbers of women and men, except for the microfinance program, which is entirely led by women — a profoundly effective intervention for transforming gender relations.

A key to success is for the epicenter committee to forge an effective partnership with local government. The epicenter committee develops the skills to negotiate for the resources to which they are entitled, yet which would not normally reach their village. I spoke to a government veterinarian in Burkina Faso who explained that before the epicenter, it was impossible for him to even think of reaching and providing vaccinations for the thousands of isolated goat herders across the region. With the epicenter, the herders organized themselves, and all brought their goats for vaccination on an agreed morning.

During phase two, villages contribute labor and materials to construct an multiroom building that houses a clinic, food bank, microfinance facility, a three-acre demonstration farm, an adult literacy training center, preschool, food processing equipment and other facilities. In phase three, the community develops the skills to run all the programs effectively and track their own progress in health, education, water, sanitation and women’s economic empowerment.

The epicenter strategy tracks local, national and continental progress on a quarterly basis. External evaluators have assessed the strategy’s effectiveness. Beginning in 2006, thanks to a generous foundation challenge match, we launched a scale-up demonstration of the epicenter strategy as a randomized control trial in the eastern region of Ghana. Roughly one-half of the clusters of rural villages in the region were invited to join the strategy. A detailed household survey was carried out in both the participating and nonparticipating clusters by Yale/IPA in 2008 as a baseline, and was repeated with the same households in 2013. We look forward to seeing the analysis in 2014.

The epicenter strategy has been developed by Africans, in Africa, for Africa. It has been shown to be replicable, affordable and effective. Our goal is for African nations to integrate essential elements of this bottom-up, gender-focused, integrated approach into their national rural development policies.

Join the Devex community and access more in-depth analysis, breaking news and business advice — and a host of other services — on international development, humanitarian aid and global health.