Do you remember the times?

More about the Most At Risk Populations network team 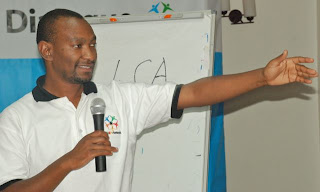 This is Geoffrey Mujisha the Executive Director and driving force behind the Most At Risk Populations (MARPs) network. Geoffrey is a medical doctor by profession but decided while working at the big Mulago hospital in Kampala that his passion was prevention - working to create really effective public health programmes that are essential to tackle challenges like HIV / AIDs. Geoffrey rallied people to the cause and the MARPs network was officially launched by the Uganda Aids Commission last June. MARPs exists to support, co-ordinate and strengthen organisations and programmes focused on people who are most at risk of becoming HIV positive. 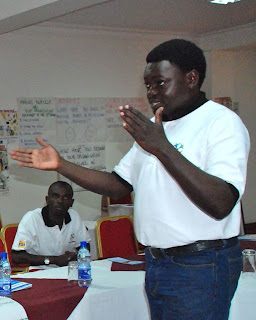 Thomas Muyunga, also medically trained, is the senior programme officer at MARPs. A key part of Thomas' role is to design and implement mobilization initiatives that raise awareness about and advocate for best practice in combatting transmission of HIV / AIDs. Thomas has taken on the task of supervising my work. 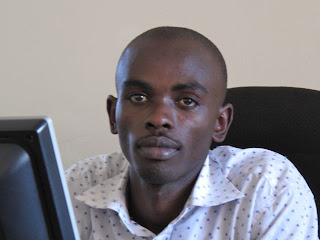 Sam Rabwehare is MARPs' finance and administrative officer - Sam is a recent graduate from Makerere University in Kampala. Sam has also shown Ian how to negotiate his way from the office through Kampala's taxi parks and market area to get his taxi to Ntinda! 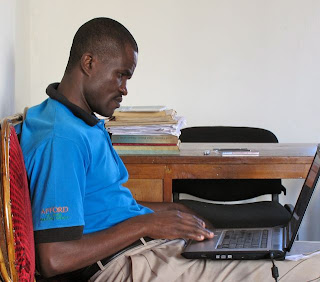 Richard Mboizi is MARPs' office manager and takes care of much of the practical stuff.

Despite the fact that MARPs has been officially launched by the Uganda Aids Commission and that the team has been properly appointed to roles within the MARPs network secretariat - they all work for nothing at the moment! MARPs has been commissioned by the UN and others to carry out a public dialogue with people from organisations working on HIV / AIDS prevention work throughout Uganda but, as yet, no one has put their hand in their pocket to fund the running costs of the Secretariat. There is currently a bid on the table with a large donor organisation so please keep your fingers crossed.

The team are an inspiration to be working with and they have made me very welcome. They call me "Mzee Ian" - "Mzee" is a Swahili word for 'old man' - and usually a term of respect. We've all had a good conversation about the priority areas for my work - all of which will be to work with the team individually and collectively to build the organisation's strength and effectiveness. Right now I'm supporting a process for analysing the significance of the findings that have come out of the public dialogue events. I'm learning so much! It's a privilege. 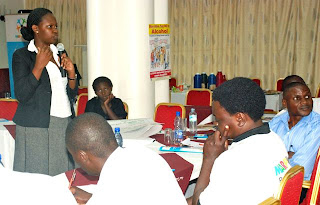 A workshop at the public dialogue event held in Kampala just before Christmas
POSTED BY IAN SMITH AT 19:43