ICRC hones in on victims of sexual violence in conflict 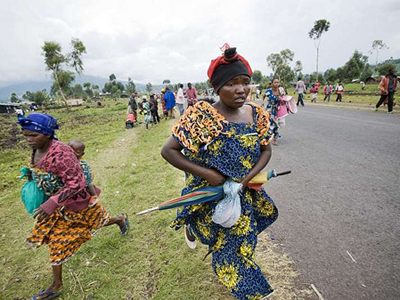 Fighting in the Democratic Republic of Congo has forced many to flee their homes and often lead to sexual violence against women. Photo by: P. Taggart / UNHCR
The International Committee of the Red Cross is stepping up its focus on victims of sexual violence in armed conflicts around the world, an issue the humanitarian agency says needs to be better understood and funded.

A key challenge in gauging the extent of the problem is the taboo and stigma surrounding sexual violence and the lack of justice for victims. This means victims are often reluctant to come forward and the crime remains underreported.

“We have to dig deeper to understand what is happening in a given context. Because people are reluctant to talk about sexual violence, we may not have a total grasp of the problem in specific contexts. Our need is to get a better understanding,” Bernard Barrett, ICRC’s public relations officer, told Thomson Reuters Foundation in a telephone interview from Geneva.

“We are going to look at better ways of collecting information on the overall phenomenon.”

Sexual violence is not exclusively a women’s issue but a problem facing men and boys, too, he added.

From Bosnia to Rwanda and the Democratic Republic of Congo, rape and sexual violence has been used against hundreds of thousands of women and girls as a weapon of war, and its impact on victims and their families is often underestimated, rights groups say.

As part of the Colombia’s 50-year-old war, for example, armed groups exploit women and girls as sexual slaves and use sexual violence against them to instill fear among communities, get revenge, and impose social and military control in an area.

In a landmark 2008 ruling, Colombia’s Constitutional Court concluded that “sexual violence against women is a habitual, extensive, systematic and invisible practice in the Colombian armed conflict.”

Although sexual violence is widespread in Colombia and other conflict-affected countries, women and girls who have been raped and sexually abused by warring factions find it difficult to access health care and justice, and are at risk of reprisal by perpetrators, the ICRC and rights groups say.

The ICRC said is it looking to expand the support given to victims of sexual violence and rape in conflict-ridden countries.

“In Democratic Republic of Congo, we help fund so-called listening houses where people can talk about what they have gone through. It can also involve working with families and communities to ensure victims are not ostracized.”

Edited for style and republished with permission from Trust Women. Read the original article.