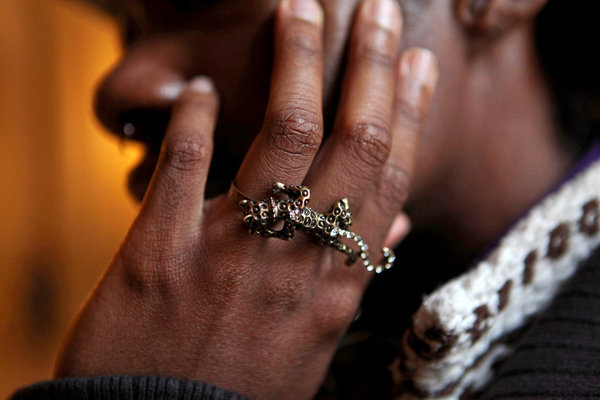 "It is not easy being human, but what is clear is being alone is the most painful condition of all."

Howard Egger-Bovet, Sonoma, CA.
Despite years of progress in preventing and treating H.I.V. in the middle class, the number of new infections nationwide remains stubbornly stuck at 50,000 a year — more and more of them in these men, who make up less than 1 percent of the population.
Giselle, a homeless 23-year-old transgender woman with cafe-au-lait skin, could be called the new face of the epidemic.
“I tested positive about a year ago,” said Giselle, who was born male but now has a girlish hair spout, wears a T-shirt tight across a feminine chest and identifies herself as a woman. “I don’t know how, exactly. I was homeless. I was escorting. I’ve been raped.”
“Yes, I use condoms,” she added. “But I’m not going to lie. I slip sometimes. Trust me — everyone here who says, ‘I always use condoms’? They don’t always.”
Besides transgender people like Giselle, the affected group includes men who are openly gay, secretly gay or bisexual, and those who consider themselves heterosexual but have had sex with men, willingly or unwillingly, in shelters or prison or for money. (Most of those interviewed for this article spoke on the condition that only their first names be used.)
Nationally, 25 percent of new infections are in black and Hispanic men, and in New York City it is 45 percent, according to the Centers for Disease Control and Prevention and the city’s health department.
Nationally, when only men under 25 infected through gay sex are counted, 80 percent are black or Hispanic — even though they engage in less high-risk behavior than their white peers.
The prospects for change look grim. Critics say little is being done to save this group, and none of it with any great urgency.
“There wasn’t even an ad campaign aimed at young black men until last year — what’s that about?” said Krishna Stone, a spokeswoman for GMHC, which was founded in the 1980s as the Gay Men’s Health Crisis.
Phill Wilson, president of the Black AIDS Institute in Los Angeles, said there were “no models out there right now for reaching these men.”
Federal and state health officials agreed that it had taken years to shift prevention messages away from targets chosen 30 years ago: men who frequent gay bars, many of whom are white and middle-class, and heterosexual teenagers, who are at relatively low risk. Funding for health agencies has been flat, and there has been little political pressure to focus on young gay blacks and Hispanics.
Reaching those men “is the Holy Grail, and we’re working on it,” said Dr. Jonathan Mermin, director of H.I.V. prevention at the C.D.C. His agency created its Testing Makes Us Stronger campaign — the one Ms. Stone referred to — and has granted millions of dollars to local health departments and community groups to pay for testing.
But he could not name a city or state with proven success in lowering infection rates in young gay minority men.
“With more resources, we could make bigger strides,” he said.
Reaching Out
Gay black youths are hard to reach, experts say. Few are out to their families. Many live in places where gays are stigmatized and cannot afford to move. Few attend schools with gay pride clubs or gay guidance counselors.
“When we talked about H.I.V. in sex ed, the class started freaking out,” said Alex, 20, who was born in St. Croix but raised in New York. “One guy said, ‘We ain’t no faggots; why do we have to learn this stuff?’ So the teacher stopped and moved on to another topic.”
When those who are poor and homeless go to traditional gay hangouts, they become prey.
Kwame, a 20-year-old from Philadelphia, said that on his first day wandering around New York last year, he was propositioned by an older homeless man and by an older transgender person. The homeless man later admitted that he was infected, and added: “If you sit here long enough, you’re going to get some propositions — and that’s where you’re going to sleep tonight. It happened to me, and it’s going to happen to you.”
NEXT PAGE »

A version of this article appears in print on December 5, 2013, on page A1 of the New York edition with the headline: Poor Black and Hispanic Men Are Face of H.I.V..